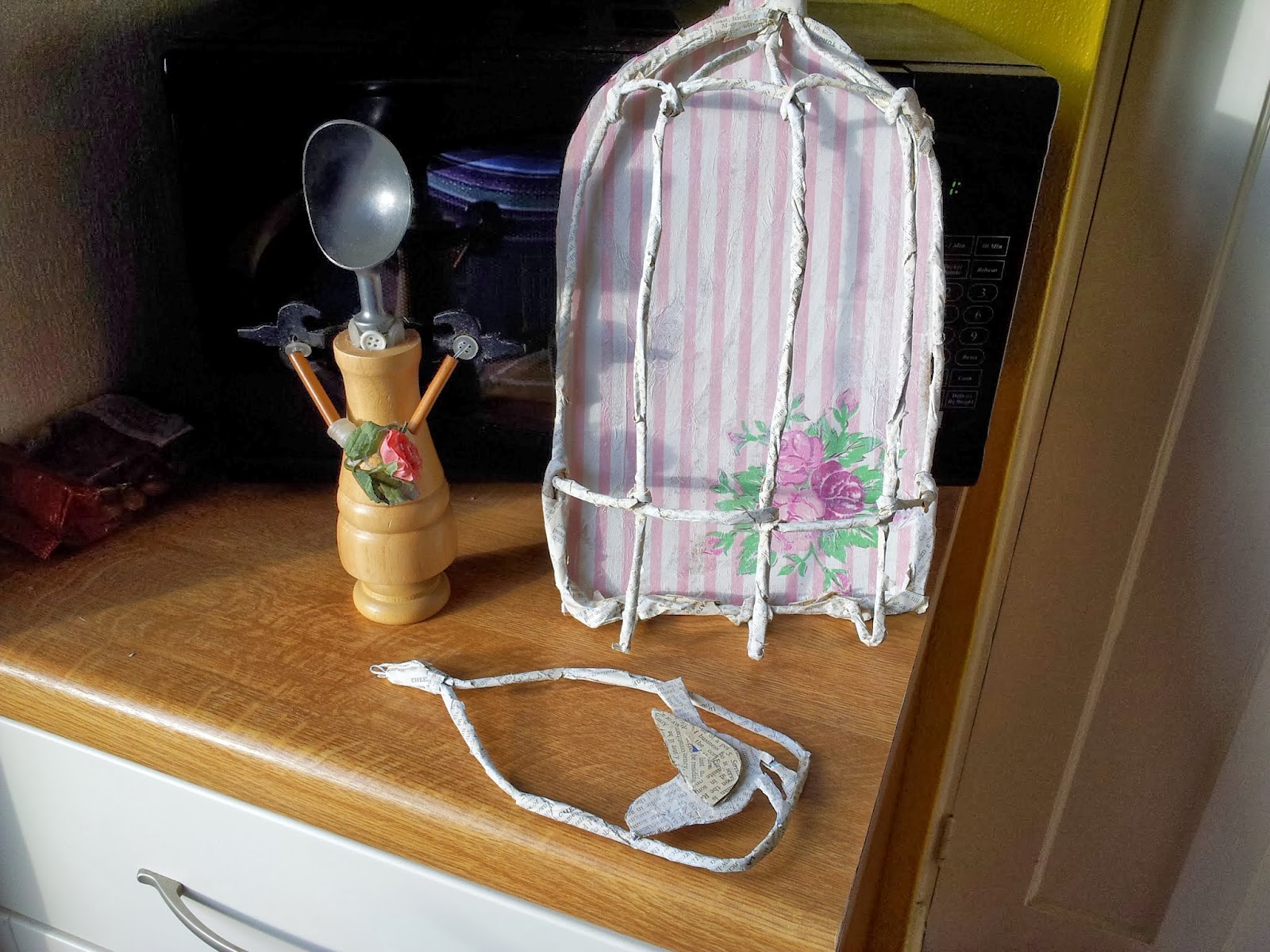 started to play with some garden wire, serviettes, sheet music and a Sizzix bird die.....not sure where its leading but its a start...I covered the wire with old book paper the easy way....double sided sticky tape...I'll have a go at padding the bird out with crumpled paper and if I don't like that.... I'll stitch a fabric one...... 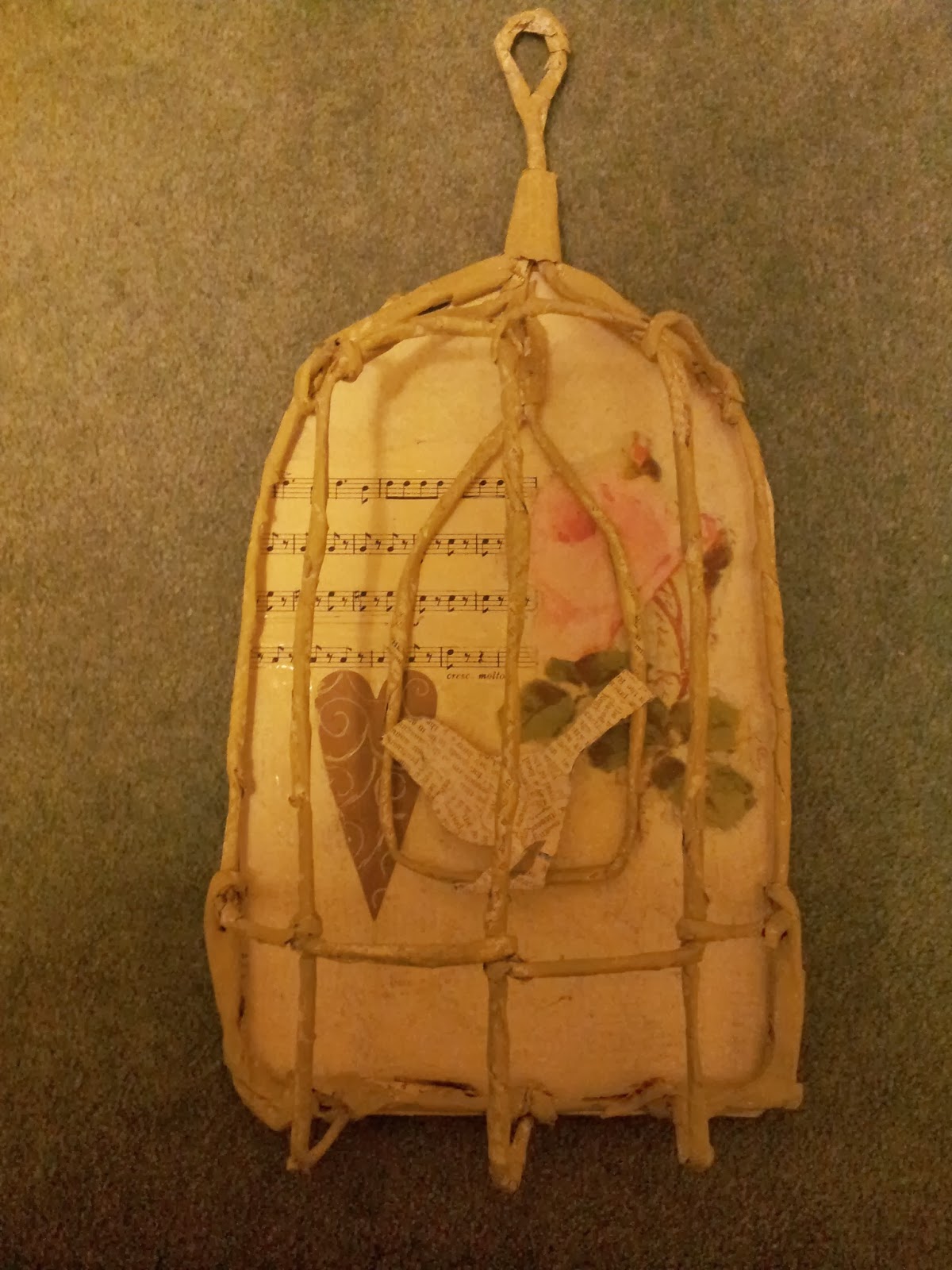 Lyn posted  a picture of these dolls that I put on the stage display when Paula gave us her talk at EYES about the dolls she makes. 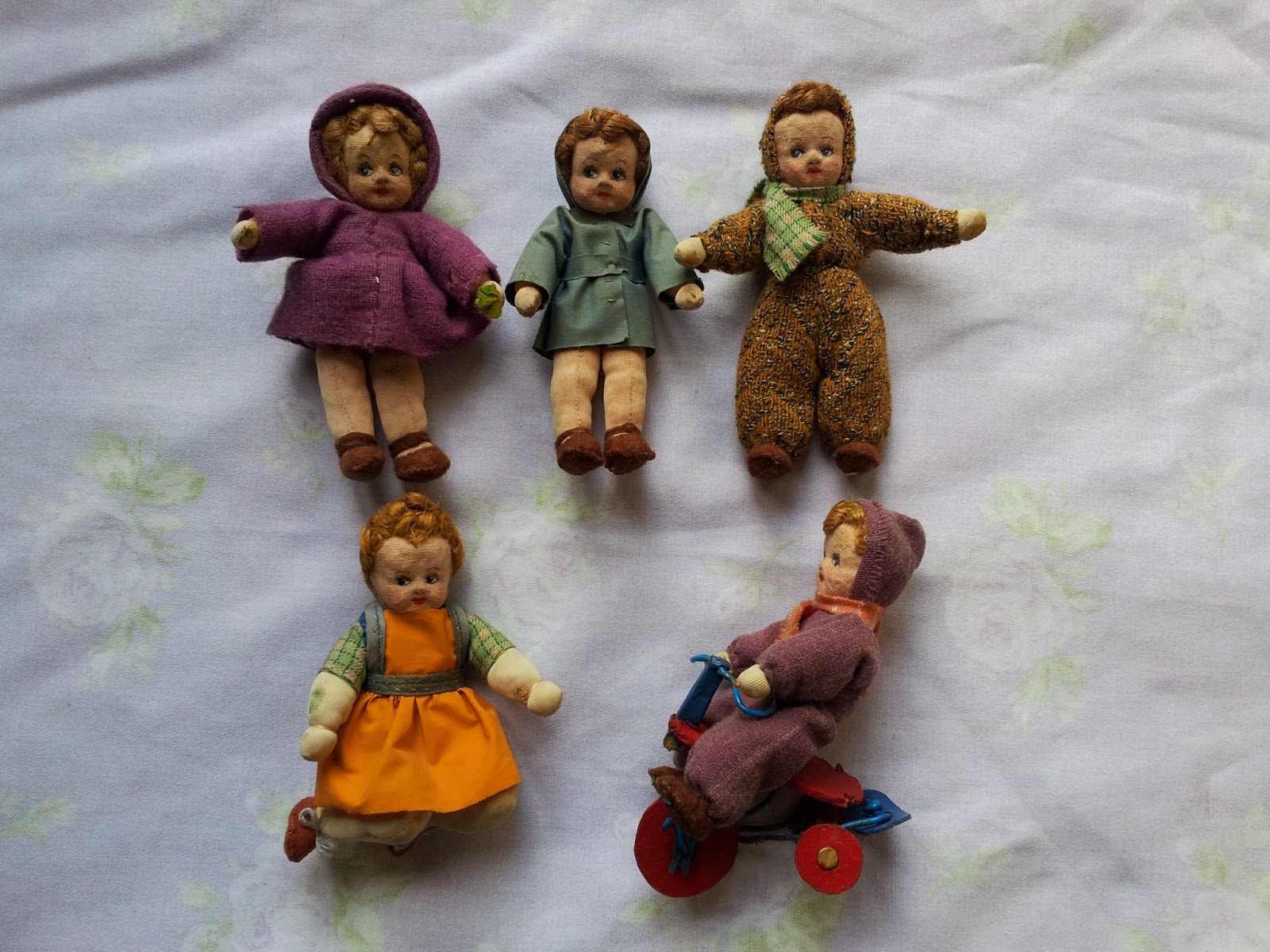 They were made by "Freddie" a talented elderly lady who came to the Dolls House club I started nearly 20yrs ago. She was a Designer in her working life although I never knew what she designed or who she worked for. Time came for her to move to a Residential Home and her home was disposed of and these were offered to me. It is not known when she made them, but they were displayed  in  a Hospice charity window roughly 20yrs ago. Judging by the materials used, they could have been post WW2.....and the way the faces were made was developed in war time....starch and muslin pressed over a dolls face to make a stiff cloth mask....like the shop bought ones. They used to be made of cloth and now can still be bought ...made of a thin plastic. I have heard stories of dolls being borrowed to make faces off during wartime. 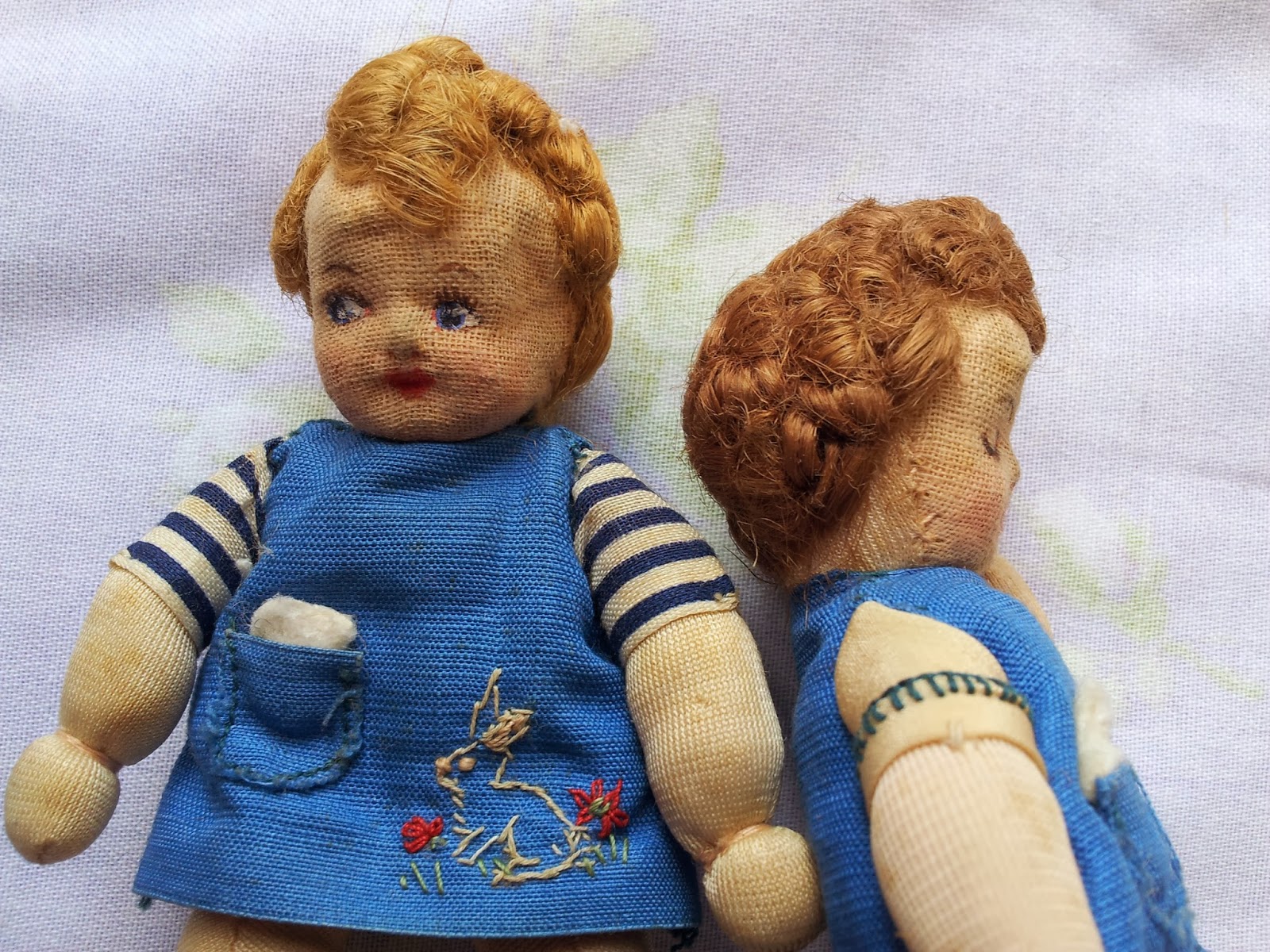 Note the face mask on the doll on the right and the way the hair is done and the face hand painted. 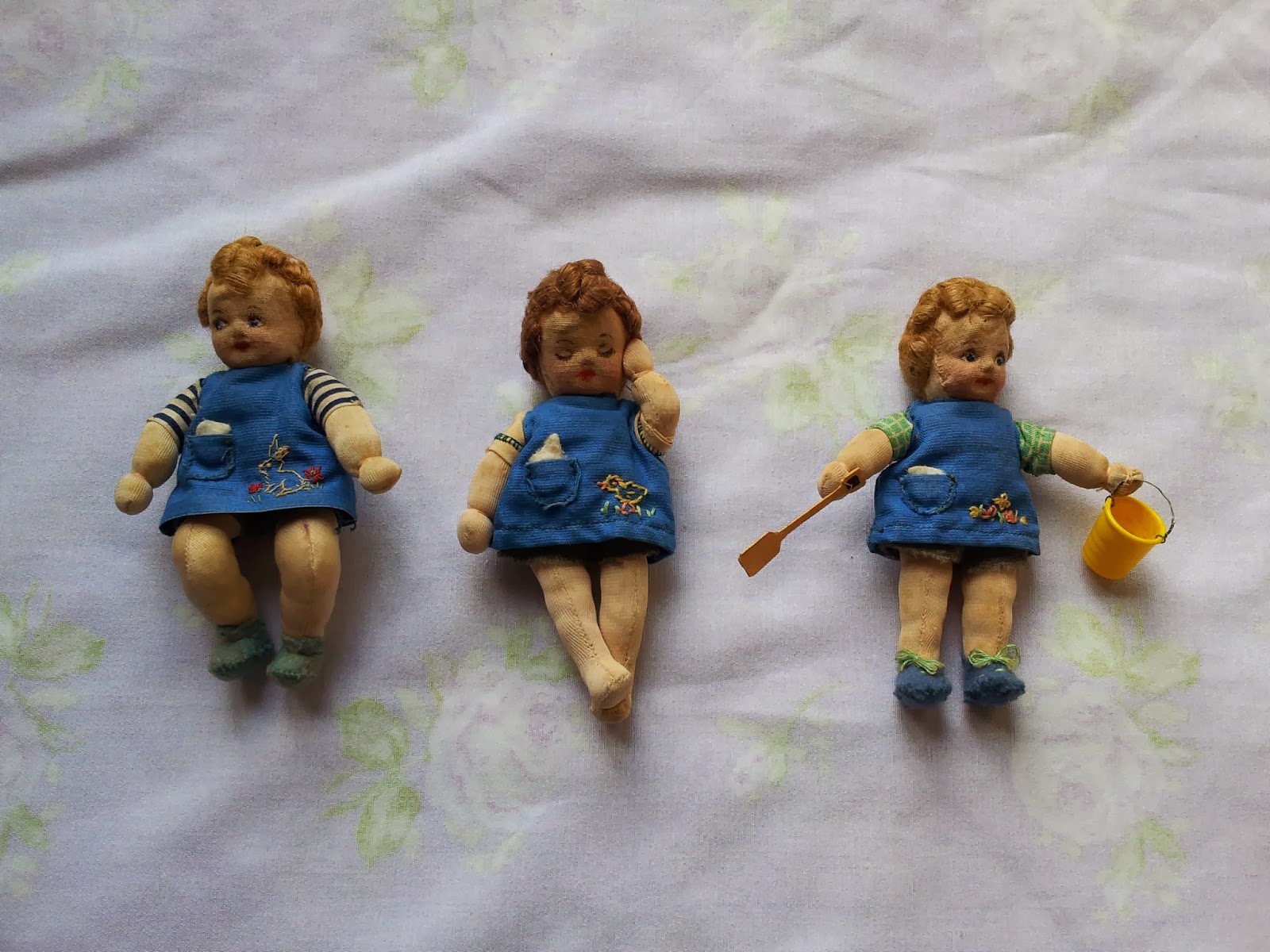 Each of the dresses of the triplets have a different embroidered motif. A thimble has been utilised as a bucket. The one on the left has "bent legs" as though originally she was sat on something and in the first picture the one with the orange dress has its legs stitched for kneeling. I gave some of the dolls to an aunt who has a huge collection of expensive dolls....she was over the moon with them... 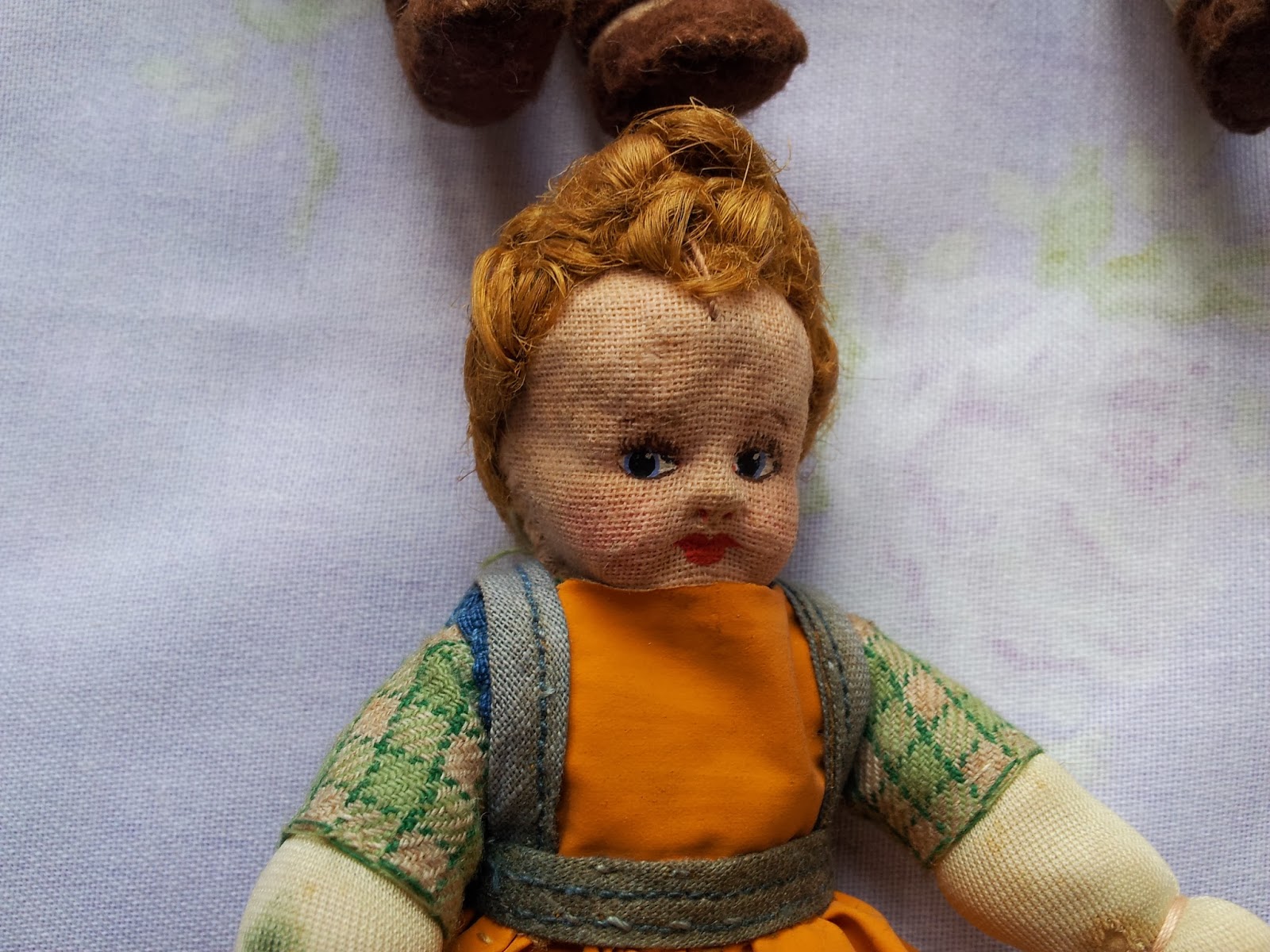 When these were displayed on the stage at EYES they were admired by many and brought back nostalgic memories for some.
The mixed media doll I put on the stage for fun...we use allsorts to make thing at EYES its not all needle and threads ! See her on my post Divas 25.9.2010 and others on the wall posts.
When I find the early dolls masks I have I'll post a picture.....
Posted by Jean at 12:38 1 comment: